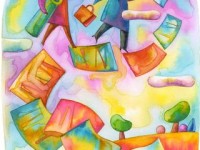 The widow of eccentric entertainment lawyer Johanan Vigoda has sued legendary musician Stevie Wonder for millions in unpaid royalties. The dispute centers on a contractual provision in the contract. The irony: Vigoda was responsible for getting Wonder out of a bad contract early in his career.

When Stevie Wonder signed a contract with Motown Records, he joined the thousands of recording artists who signed documents that were better for the record companies than the artists themselves. Wonder was happy when his attorney, Johanan Vigoda, got him out of the contract with Motown.

Vigoda was also able to secure a lucrative new contract for Wonder that was considered to be one of the best in the industry. Vigoda passed away in 2011.

His widow now claims that Wonder has failed to live up to that contract. A provision in it gives 6% of Wonder’s royalties to Vigoda and to Vigoda’s heirs in perpetuity. The 6% is higher than music industry standards and the perpetuity clause is also irregular.

The Daily Beast reported on this lawsuit in “Is Stevie Wonder Cheating a Dead Man?”

As everyone knows, Stevie Wonder is blind. He never read the contract himself, but had it read to him. He claims that either the perpetuity provision was not read to him or that he failed to catch it when the contract was being read.

The great irony in this case is that the attorney who got Stevie Wonder out of a bad contract may have turned around and tricked Wonder into another one. That is at least the accusation. As of now, no court date is set in this case, so it may be quite a while before we know what happens.